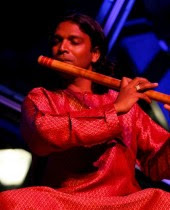 Currently residing in Australia, Vinod is a performing and recording artist, teacher, craftsman and ambassador of the Bansuri.  Vinod has more than 25 years of performing and teaching experience and continues a family legacy that celebrates more than two-and-a-half centuries of Indian music.

Vinod has performed and toured extensively throughout his homeland and overseas. Performances include the Folk Dance Festival in Delhi in 2005; Bhagavad Gita recitals; performances at Varanasi’s famous Benares Hindu University in 2009; and tours of north and south India. Internationally, in 2003 Vinod toured France and was featured in the French documentary Odyssey; toured Japan in 2006, sponsored by the Yamaha Music Company; and in 2007, made a musical and cultural visit to Germany, hosted by the International Arts School in Munich. In 2006, Vinod also won the prestigious Sahara All-India Flute Competition. Based in Australia since 2008, Vinod is recognised as an unrivalled Bansuri soloist.  Performances in Australia include the Bellingen Global Carnival in 2008; in 2009 Music for Meditation at BMW Edge in Melbourne’s Federation Square. Vinod performed as part of the 2009 opening celebrations for Parliament of the World’s Religions, and performed with Dya Singh at the Premier’s 2009 Sustainability Awards, and at The Melbourne Arts Centre for the Mulitcutural Arts Council, Victoria. Vinod performed at the Woodford Folk Festival in 2010 and 2011. He has performed live radio broadcasts on 3PBS and 3RRR and has been featured on the ABC's The Daily Planet, The Weekend Planet and Music Deli. Peninsula Summer Music Festival 2016
He is a member of Interact: The Australian International Music Ensemble. Most recently he has joined musical forces with world class percussionist David Jones and guitarist Evripides Evripidou to form Brothers, an exciting Indian Jazz fusion ensemble with a difference!

Vinod can be contacted on 0420 44 73 73 or email: vinod_prasanna2002@yahoo.com  for concert, event, festival, recording and teaching enquiries.